When someone mentions water bears or space bears, they’re talking about this little guy. 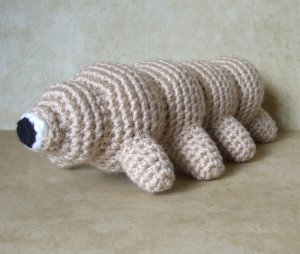 I was going to give him claws, but I ended up not doing it. I couldn’t get them to look right even at this scale. So he is clawless.

He’s a pretty quick pattern. I probably would have had this all done yesterday if the front half hadn’t ended up in my tea. I think the hardest part of this is making sure that the legs are all lined up properly.

Pattern available on Etsy and slightly cheaper on Ravelry.

Next up, I’m making a harpy. I don’t know if I’ll be doing more Greek mythology monsters at the same time, but I really want to make a harpy. And probably Ganesh.