My daughter was playing with some of the critters and we were going over how some orcas will flip sharks upside-down so they can eat them, and orcas eat belugas, and I figured it would be a good idea to make more prey animals. Orcas eat sea lions, so… Sea lions it was! 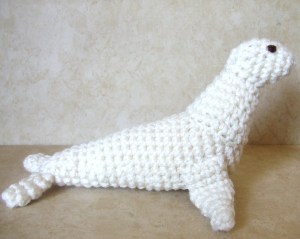 I LOVE the cream color that some of the females are (this is based on a female) and the snout is a little different than, say, a California sea lion. It’s flat with the top of the head on top and tapered a little down toward the neck, which was easy to reproduce on this scale.

Pattern available on Etsy and Ravelry.

I am making an emperor scorpion next, which is a bit of a challenge for me, but my son wants one. 😀