This is my take on a certain “private detective.” 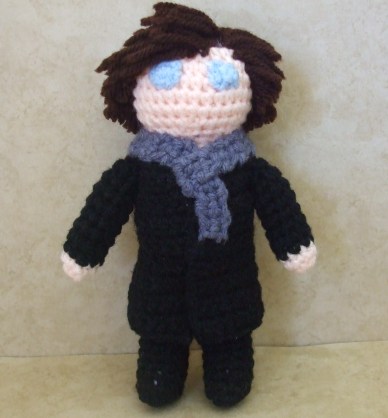 He was fun to make! This was the first time I’ve tied on a full head of hair, and the part that took the longest was the hair line. After I got the hairline in, it was just a matter of filling in the back, and I didn’t need to tie onto every stitch until I got to the top. Still a longer process than sewing the part down the middle. 😀 He is on his way to Canada!

I’ve been having some issues with fabric.com, and apparently I’m not the only person who’s been having problems with them lately.

Anyway, I’ve been waiting for my refund for an unreasonably long time, and finally I just opened a dispute through Paypal. A friend of mine was saying that she had to wait a month to get her refund, and that’s pretty terrible. I don’t know if they’re just too busy to keep up with all of that stuff- updating the site, issuing refunds, etc. and I’m willing to give them another shot, but the next time I order yarn, I’ll probably order from herrschners.com.
Next up: I think I’m going to make some more keychains, finish another scarf, and then either make Father Christmas or my wedding party minis

This entry was posted in Stuff I Learned, Stuff I Made, Talkin'. Bookmark the permalink.